In My Postbox #27: Catch Up And Christmas 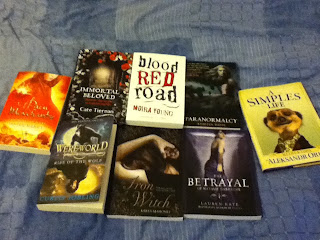 In My Mailbox idea from Kristi @ The Story Siren, and all links take you to Amazon UK.
Thanks to many various reasons, I've been unable to do an In My Postbox post for a while. Bit now I have a bumper one which includes all the books I've received from the amazing publishers, and one I've brought myself! As well as,... well, you'll see.
FOR REVIEW

Immortal Beloved by Cate Tiernan
"New name, new town, new life. Nastasya has done it too often to count. And there’s no end in sight. Nothing ever really ends . . . when you’re immortal. Captivating, intense and with an incredible and original voice, IMMORTAL BELOVED is a haunting story of friendship, love and secrets, tragedy and loss."
I have both a proof copy and final copy of this and am VERY much looking forward to reading it. The finished book has this finish to the cover which makes it feel weird. It's kind of velvety. Very cool! And it sounds very interesting! Thank you to Hodder for this!
- Paranormalcy by Kiersten White
"When your world is paranormal, be glad that you’re human… Exciting new author brings a fresh sassy take on paranormal romance, loved by Becca Fitzpatrick, author of HUSH, HUSH. Sixteen-year-old Evie has always taken comfort in the fact that she is normal, even though her best friend is a mermaid and her ex-boyfriend is a lunatic – and a faery. In a world where paranormals are monitored and controlled, Evie works for the International Paranormal Containment Agency because of her unique ability to see through glamours. But someone – or something – starts killing vampires, werewolves and other paranormals, and Evie must figure out what’s happening before they all disappear. Then a shapeshifter named Lend breaks into the agency, and Evie is irresistibly drawn to him, even though he makes her aware that the IPCA is not as noble as she once thought. With everything Evie believes suddenly called into question, the IPCA is attacked and she must choose who she can really trust. And when Evie discovers she’s part of a faerie prophecy of death and destruction… so much for normal."
This book also sounds very interesting! Not my normal genre but will be giving this a read pretty soon! Thanks to HarperCollins!
- The Pain Merchants: The Healing Wars Book 1 by Janice Hardy
"Nya has a secret she must never share… A gift she must never use… And a sister whose life depends on both. This astonishing debut novel is the first in the epic dystopian fantasy adventure trilogy, THE HEALING WARS. Fifteen-year-old Nya is one of Geveg’s many orphans; she survives on odd jobs and optimism in a city crippled by a failed war for independence. Nya has a deadly secret. She is a Taker, someone who can extract pain and injury from others, but with unusual differences. Her sister Tali and other normal Takers become Healer’s League apprentices and put their extracted pain into enchanted metal, pynvium. But Nya can’t dump pain in this way. All she can do is shift it from person to person. When Nya’s secret is revealed to the pain merchants and the Healer’s League she is flung into danger. Then a ferry accident floods the city with injured, Takers start disappearing from the Healer’s League and Nya’s strange abilities are suddenly in demand. Her principles and endurance are tested to the limit when Nya’s deadly powers become the only thing that can save her sister's life."
I've read this already and enjoyed it, so expect a review in the next few weeks! Again, thanks to Harper Collins for this!
- 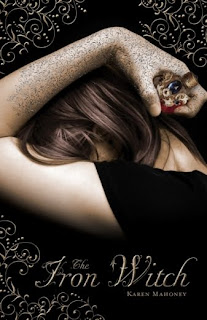 The Iron Witch by Karen Mahoney
"Freak. That's what they call seventeen-year-old Donna Underwood at Ironbridge High School. A horrific fey attack that killed her father when she was just a child left Donna branded with iron tattoos that cover her hands and arms - and magically enhanced strength, that she now does all she can to hide. Now, after ten years of wishing for a normal life, Donna finally accepts her role in the centuries-old war against the darkest outcasts of Faerie - the dark elves. Aided by Xan, a gorgeous half-fey dropout, Donna must save her best friend's life - and that means betraying one of the world's greatest secrets and confronting the very thing that destroyed her family."
This sounds very interesting! Looking forward to getting around to it soon! Thank you to Random House for this!
-

The Betrayal of Natalie Hargrove by Lauren Kate
"Lauren Kate's irresistible first novel, THE BETRAYAL OF NATALIE HARGROVE, features the most ruthlessly ambitious heroine since Lady Macbeth. Natalie is utterly determined to cement her position at the top of the high school social ladder by becoming prom queen. When it looks like aninterfering ex-boyfriend might get in her way, she devises a little prank to humiliate him. But when the prank goes devastatingly wrong, Natalie starts to lose control of her life. Caught in a web of dark secrets, shame and abuse of power, it's not guilt that eventually defeats Natalie. It's fate: the only thing she can't control . . ."
Again, this isn't my normal style of book, but I'm open to anything so am actually looking forward to reading it. Thanks to Random House!
- 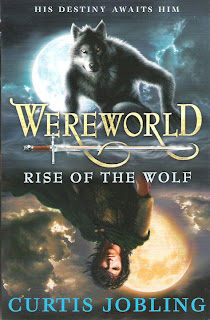 Wereworld: Rise of the Wolf by Curtis Jobling
"‘YOU’RE THE LAST OF THE WEREWOLVES SON. DON’T FIGHT IT . . . CONQUER IT.’ When the air is clear, sixteen year-old Drew Ferran can pick up the scent of a predator. When the moon breaks through the clouds, a terrifying fever grips him. And when a vicious beast invades his home, his flesh tears, his fingers become claws, and Drew transforms . . . Forced to flee the family he loves, Drew seeks refuge in the most godforsaken parts of Lyssia. But when he is captured by Lord Bergan’s men, Drew must prove he is not the enemy. Can Drew battle the werecreatures determined to destroy him – and master the animal within?"
I'm currently reading this and loving it. And the cover art is beautiful! Amazing. Puffin have really outdone themselves with this one! Thanks for the copy!
-
Blood Red Road by Moira Young
"In a lawless future land, where life is cheap and survival is hard, Saba has been brought up in isolated Silverlake. She never sees the dangers of the destructive society outside. When her twin brother is snatched by mysterious black-robed riders, she sets outon an epic quest to rescue him. The story's searing pace, its spare style, the excitement of its fabulously damaged world, its unforgettably vivid characters, its violent action and glorious lovestory make this a truly sensational YA debut novel."
Out in June, this book doesn't even have a cover out yet! But it is HUGE! Massive book! Cannot wait to read it. Sounds amazing!
BOUGHT 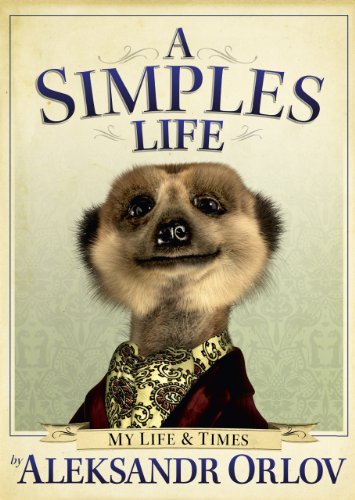 A Simples Life: My Life and Times by Aleksandr Orlov
"The hilarious autobiography of the nation’s favourite meerkat"
I love the whole meerkat thing, Compare the Meerkat, I find it hilarious and when I saw this in Asda I just had to have it. Haha. Finished it this morning. Funny stuff! Review soon!
-
The rest of my brought items were brought for something special. Very special... My Kindle!!!! :D 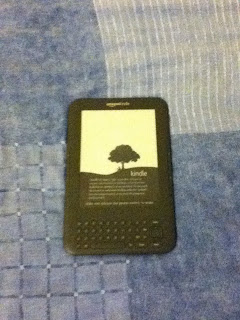 So there we go. That's what I've gotten over the last few weeks! :) Hope everyone had a great Christmas and New Year and got lots of lovely new books to read!
Posted by Ryan at 16:20