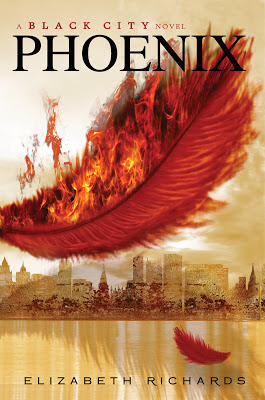 Official synopsis: "Ash and Natalie are just starting to build a life together when things in the United Sentry States go from bad to worse. Ash and Natalie find themselves at the center of turmoil when dictator Purian Rose threatens Natalie’s life unless Ash votes in favor of Rose’s Law—a law that will send Darklings and other dissenters to a deadly concentration camp known as the Tenth. When Ash can’t bring himself to trade Natalie’s life for those of millions of Darklings, her fate is sealed. Enter Elijah Theroux, the handsome Bastet boy Natalie once saved from her mother’s labs, where he’d been experimented on and tortured. It was his venom the Sentry used to create the lethal Golden Haze, the heart of the government conspiracy that led to Black City’s uprising and Ash’s rebirth as the Phoenix, the face of the rebellion. Elijah is back and Ash doesn’t like him; it’s clear he’s taken with Natalie, and Ash fears she may have feelings for him as well. But Elijah also may have the answer to taking down Purian Rose for good—a powerful weapon called the Ora. Ash, Natalie and Elijah just have to escape Black City undetected to find it. But fleeing the city and finding this weapon (if it even exists) are easier said than done, and the quest could tear Ash and Natalie apart, even pushing them into the arms of others. This enthralling sequel to Black City is just as absorbing, delicious and steamy as the first book, leaving readers hungry for the series conclusion."

I have literally no idea where to start this review. I knew that it'd be an awesome read because book one of the trilogy, Black City, which was published last November blew me away, but boy was I unprepared for this one. This book reduced me to a quivering mess by the time I turned the last page. The stakes are so much higher than they were in Black City. Ash and Natalie made a joke of Purian Rose and he is not a happy chappy. They knew he wouldn't take it sitting down but boy does he have some horrors up his sleeve.

I will be honest, there are some points where I think Phoenix is a little quieter than it's predecessor, but that's only because there's quite a bit of tavelling across the United Sentry States, and also there is some build up for the final book in the trilogy, Wings, which is due next year, so this is understandable. Phoenix has a job to do, to set things up nicely for what is sure to be a stunning conclusion.

I love the elements taken from our own history. The concentration camps - just the mere mention enough to send a chill down your spine and into your heart - really make a great addition to the story and make it feel all the more real. Purian's use of his army, the weapons they possess, and their sheer cruelty. All these make for a stunning conflict that has you glued to the pages as Ash, Natalie and co try to stay one step ahead of their enemy.

The characters, just as with Black City are as lovable and hatable as they were. You hate Purian with every fibre of your being and Sebastian turns out to be even more of a nasty piece of work. This book I feel is a lot grittier than book one, some of the things that happen, the things some of the characters do to one another... I just couldn't, and there was one point, which I'm sure Elizabeth knows what I'm on about... where something so vile and sickening happens that despite this being a totally addictive read, I had to put it down for five or ten minutes and just breathe through gritted teeth. If Sebastian was a real person, oh boy!

But then the good things. Ash. Damn. I said in my review for Black City he is sexy and I stand by that. He's just such a swoon-worthy character, I love all his chapters, I love everything about him, even his flaws. That and I imagine Zayn from One Direction as him as he just seems to fit so well! Haha. I know I've said this to Elizabeth herself and she agrees! Perfect casting there! And this book does get pretty damn steamy in places too! Pretty steamy indeed!

But no, this book knocked me even harder than the first so I am in someway dreading book three! What are you going to do to us next, Elizabeth? We're only human. We can't take it!

Honestly, if you haven't read Black City, do it! Yes it's vampires, but they're so much more than that and the whole race issue kind of detracts from them being supernatural, more just vulnerable. I can't recommend them enough and I am dying for Wings already!