The Eye of the Falcon by Michelle Paver [Review]

PLEASE NOTE THAT THIS IS THE THIRD BOOK IN THE GODS AND WARRIORS SERIES, SO IF YOU HAVEN'T READ THE FIRST TWO BOOKS, THE OUTSIDERS AND THE BURNING SHADOW, THEN PLEASE BEWARE THE SPOILERS!!! THANK YOU! 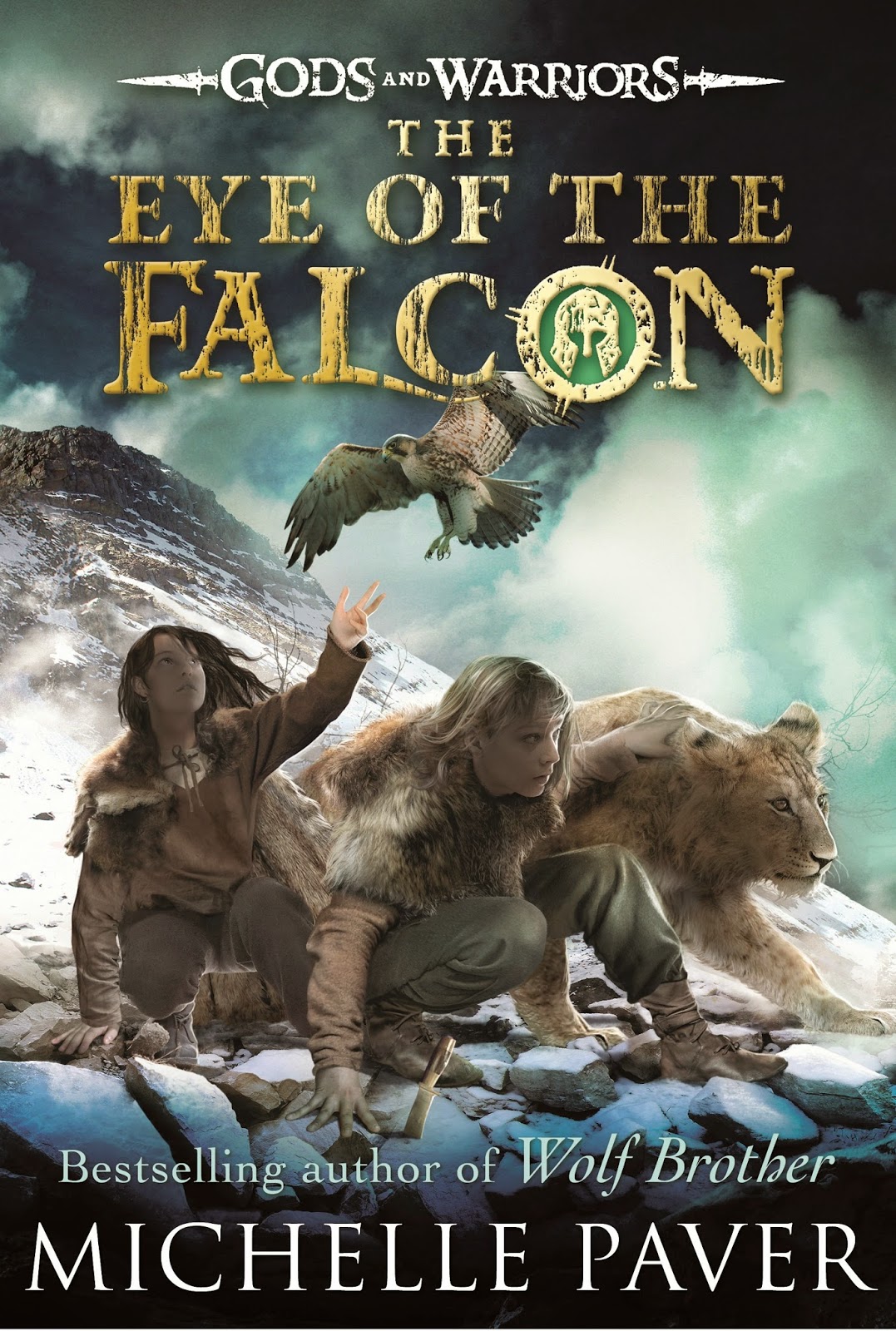 Official synopsis: "Winter has been colder than anyone can remember, and there is no spring. The eruption of Thalakrea has shrouded the sky in ash, and blotted out the Sun. Fate brings Hylas to the island of Keftiu. He is desperate to find his friends: Pirra, the daughter of the High Priestess, and Havoc the lion cub. But Keftiu has suffered more than anywhere from the fury of the gods, and the once-prosperous island has been ravaged by cold, famine and plague. As Hylas sets off alone to seek his friends, he is tormented by the fear that Pirra and Havoc may not have survived the winter..."

Oh boy! It's that time of the year again! No, not Christmas... It's time for my annual Michelle Paver gushfest! In the words of Bing Crosby it most definitely is the most wonderful time of the year. For me, anyway! Year after year, Michelle never fails to amaze me, shock me, draw me into a world so incredibly different from the world that we live in today that I cannot help but fall in love. I've been a mega fan, as you will know if you've been around since my blog began, of Michelle ever since I first picked up Wolf Brother, the first book in the epic Chronicles of Ancient Darkness series! Ten whole years! But more about that in a few weeks! ;)... Ever since I picked up Wolf Brother Michelle has been a huge part of my life as those books came at quite a dark time in my life and helped me through some quite difficult times. Maybe that's why I have such an affinity with Michelle and her work...

But back to present day where The Eye of Falcon, the third book in the stunning Gods and Warriors series has just been published... Oh, be still my beating heart. She's done it again! This series is shaping up to be something pretty damn special and this instalment only solidifies that. After the explosive (literally) conclusion of the last book, The Burning Shadow, Hylas is alone on Keftiu. The world has changed and not for the better. The sun has gone. The land is dying and so are the people and this winter has been the worst known for years. And the gods are angry. The gods have left Keftiu, a forsaken land, but Hylas must seek Pirra, he needs to make amends. And he needs to find the dagger of Koronos soon or else no one will ever be safe.

As per the usual, Michelle's writing is so fluid and elegant, so silky. Her prose almost feel like a warm hug, enveloping you, dragging you deeper down into the story. It's so hard to remove your eyes from the page, in fact sometimes it's nigh on impossible! The characters are so well fleshed out and no one seems to be there just for the sake of it, they all have their own purpose. Including Echo, the falcon. That's one thing I love about Michelle's books. The animal element she incorporates. It's so fresh and so well written that you almost feel as if you are in the animals head, experiencing it's thoughts. She doesn't make them feel human, they feel raw, wild, animalistic. It's so captivating, and now, seeing parts of the story through both the falcon's eyes and those of Havoc, the lion cub, adds an extra dimension to the story. This is something Michelle did so well in the Chronicles, with Wolf, the wolf... and with Spirit the dolphin in the first Gods and Warriors book. It's just so cool!

The stakes are getting higher and this makes for a very exciting read. There are only two more books to come in this series and I cannot wait to see how it ends. Next years instalment, The Crocodile Tomb, cannot come quick enough! Next time we're off to Egypt and given Michelle's talent for bring ancient worlds to life I cannot wait to see her take on ancient Egyptian life. In fact I am so excited it's unreal! The only gripe I had, albeit a minor one, is the death of a major character that happened in between The Burning Shadow and The Eye of the Falcon. It felt a bit brushed over, and I would of liked to see something quite dramatic happen to the character, but other than that I couldn't love this book more if I tried!

One major gripe though, and this isn't towards Michelle and the content of the book... It's to the publisher! I've long vented my fury about cover changes, as I did when they changed the style of the covers in between book one and two of this series... I was livid... But this is worse... They've changed the format! The format! Books one and two were published in beautiful hardbacks with stunning coloured edges, then for some reason with The Eye of the Falcon, they've gone straight to paperback... Now, this is okay because I do have the first two books in paperback as well, and all three covers match... But now I have two obsolete copies, beautiful hardbacks that alluded to a lovely collection and now that has been taken away from me. To say I was gutted when I found out the book wasn't being published in hardback was an understatement. My OCD doesn't allow for format changes and it drove me insane! There is a hardback being released in America next year, but it's a different size so it isn't gone to match the copies I've got so that upsets me a bit! Like I say, it's the only real problem I have about this book... the format change! I just don't get it... I really don't!

But to end on a positive note, because a book of this calibre is nothing but epic, please please please, I beg you, check out this series and check out Michelle's work in general. It's so rich and immersive, I guarantee you will fall in love just as much I have!

Labels: 2014, Chronicles of Ancient Darkness, Gods and Warriors, Michelle Paver, Reviews, The Burning Shadow, The Eye of the Falcon, The Outsiders