To Sleep in a Sea of Stars by Christopher Paolini [Review] 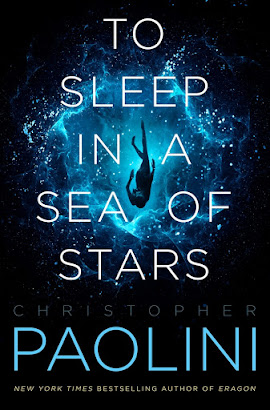 Written by: Christopher Paolini.
Published by: Tor.
Released: 15th September 2020.
Format: Hardback.
Rating: 5/5.
Official synopsis: Kira Navárez dreamed of life on new worlds. Now she’s awakened a nightmare... During a routine survey mission on an uncolonised planet, Kira finds an alien relic. At first she’s delighted, but elation turns to terror when the ancient dust around her begins to move. As war erupts among the stars, Kira is launched into a galaxy-spanning odyssey of discovery and transformation. First contact isn’t at all what she imagined, and events push her to the very limits of what it means to be human. While Kira faces her own horrors, Earth and its colonies stand upon the brink of annihilation. Now, Kira might be humanity’s greatest and final hope . . .
-
I have been a long time fan of Paolini, since around the time that Eldest came out and I followed the Inheritance Cycle all the way to its thrilling conclusion and have been waiting to see what he would do next. Now, nine years after the release of the last book in the series, Inheritance, we finally have our answer in To Sleep in a Sea of Stars. A book that Paolini has been talking about and teasing for several years as he went through the process of drafting and re-drafting the novel several times, often posting pictures on social media of the manuscript growing chapter by chapter.
I will admit, I am not normally a massive sci-fi fan, particularly that aimed at an adult audience, but I knew the moment that this was announced it would be a must-read for me as I had been anticipating a new Paolini book for a very long time, and from the very first page I was hooked and was well and truly along for the ride. And what a ride! For a book that clocks in at just under 900 pages I cannot explain just how much it flew by. The pacing ebbs and flows. When the book begins it doesn't really take long for the action to begin and then it kind of settles for a little while just building everything up, getting all the key players into place and then BAMN. This bad boy exploded. Quite literally. There were times where I felt like I couldn't keep up - it was relentless and I loved it. The last two parts of the book itself where simply mind-blowing. Every page would bring a new "WOW WTF THIS IS CRAZY!!!!" moment and just when you thought it was going to climax it would reach a new high and just keep going. Breathtaking.
It's difficult to really say much without spoiling the book. What I loved about it more than anything was that it wasn't what I had expected at all. I had in my head what I thought it was going to be and it just completely surprised me from the word go. I liked this as no one likes a predictable read, there's no fun in it! The book itself is quite dark in places (not just because it's in space...) but there is some humour interspersed in there too which I really liked, helped break up some of the more hard-hitting moments.
As for the characters, we obviously spend the most time with Kira, a xenobiologist who has been on a mission to help determine whether or not human colonies can be set up on a planet many, many lightyears away from the home planet, Earth. She's firey, determined, doesn't take anyones crap. I loved her. There is also a great supporting cast too. A large one at that! I did sometimes find it a little complicated to keep track of who was who and who and said what and who had done what but soon found myself getting into the rhythm. One character I particularly loved was a ship mind called Gregorovich who was a particular highlight.
I really feel like Paolini's writing has improved a lot as well. It's been several years since I read the Inheritance books (re-read, anyone?) but it just flew like in the years that he's been working on it he has really honed his craft. The action scenes were tight and so much fun to read. The quieter, more emotional moments were soft and equally enjoyable.
Overall this book was well and truly worth the wait. Breathtaking. Exhilarating. With more planned in this universe and a prequel novel already completed (according to his own live stream I watched a few weeks ago) it looks like there'll be plenty more Paolini to enjoy! I'll be here waiting!
Posted by Ryan at 08:00

Labels: 2020, Christopher Paolini, Reviews, To Sleep in a Sea of Stars